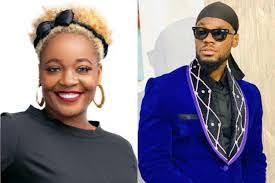 The Big Brother Naija, BBNaija housemate, Prince on blasted Lucy over her ill attitude in the BBNaija House

It all started after Lucy declined to be paired in the same group with Kiddwaya and Erica.

This got some housemates upset and the same led to a heated argument in the house.

Prince who did not find the nonchalant attitude from Lucy funny raised his voice at her and asked her to respect the authorities in the Big Brother house.

He further advised her to accord the same respect she gives to Big brother. I’m fed up with you, I advise you every time but you should have learnt by now.” Speaking to Lucy who almost got into a fight with Erica again on Wednesday, Prince said most of the housemates misunderstand Lucy because of how she puts out her emotions and acts defensively.

He advised her to control her emotions and not let the emotions get in her way. Prince said: “Lucy you need to control your emotions, you feel everyone hates you and tries to be on the defensive. “

You are an amazing person but we have different points of view and have different understandings so you cannot blame them. You cannot control how people act towards you, you are my friend and you have flaws like every other person but never feel you are less of a person.

Not everyone will like you and we cannot all like each other. “When you say things sometimes and people do not understand it is because the person is stuck in what they believe in.”

The BBNaija Housemate  Lucy became emotional and broke down in tears saying most housemates misunderstand her and do not listen when she speaks.