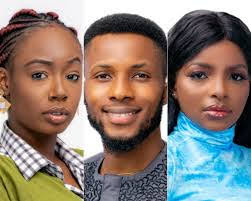 Big Brother Naija 2020. It's another Sunday and it.      comes  with another eviction night.

Their exits were unexpected as many did not see Wathoni, one of this season’s favorite housemates, leave the  Reality TV show.

Whilst they were waiting to get called into the Diary Room to nominate those who would go home, Ebuka announced that the public votes will determine the fate of the housemates.

According to him, Tolani Baj, Wathoni and BrightO, fell into the bottom three and they evicted accordingly.

Tolani Baj, Wathoni, and Brighto have been evicted from the Big Brother Naija Lockdown reality TV show. Tolani Baj was the seventh housemate, Wathoni became the eighth while Brighto was the ninth person to be evicted. All the housemates excluding Tolani Baj were clearly shocked as she has never been on the bottom four nor has she been nominated for eviction since the show started. The evicted housemate's love interest, Prince, felt sad but he quickly hugged and kissed her until Big Brother counted down for Tolani Baj to leave the house.

Among the three evicted, BrightO was the least expected to have left the Big Brother Naija Reality TV show, as many didn't see him leaving anything soon.