BBNaija 2020: I would have dated you - Erica tells Neo 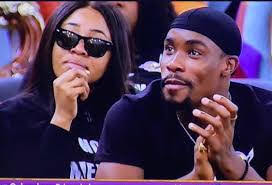 Big Brother Naija housemate, Erica has revealed that Neo was her second choice as a partner if Kiddwaya was not in the house, she made it clear as she bitterly confronted Kiddwya that he's just after her body and always makes her shade tears.

Erica made this known to Neo after the night eviction show. According to her, Neo would have been her second choice if the billionaire’s son Kiddaway wasn't in the Reality TV show BBNiaija.“You would have been my second option if Kiddwaya was not in the house,” Erica said. As Erica and Kiddwaya have been having numerous issues for the past few weeks.

Erica has been complaining bitterly that Kiddaway only sees her as a friend and nothing more or any feelings attached as the Billionaire son have even stated this in one of the eviction show been asked by Ebuka.