It was a drama, albeit a mild one but a drama still at the International Conference Centre, ICC at Abuja when Nollywood Actress, Tonto Dikeh was seen throwing off her shoes in front of a hall and then storming off  in anger into her car. 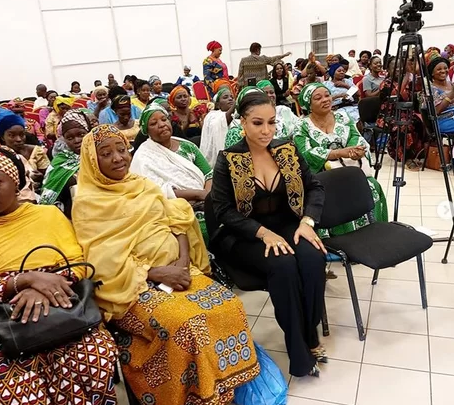 The reason for the display was due to the mix up of two events that were scheduled earlier today at Abuja were held at the same venue, the very place the actress was to deliver a speech at the African Women Conference, AWC but arrived at a different hall where the National Youth Entrepreneurship Empowerment Summit , NYEES was being held. When she wasn’t attended to by any of the staff, she got visibly upset and left.

She later found her way to #AWC hall and gave her speech.


The moment #TontoDikeh threw off her shoes after arriving at a wrong event . . There was mild drama today at the International Conference Centre, ICC. #Abuja, as Nollywood actress, Tonto Dikeh, threw off her shoes after arriving at a wrong event. . . The superstar actress was scheduled to deliver a speech at the Africa Women Conference, #AWC, but ended up at the National Youth Entrepreneurship Empowerment Summit, #NYEES . . The mix up stemmed from the fact that both events were to hold at the ICC, but at different halls. . . However when she got to the NYEES venue, she wasn’t attend to, prompting her to leave, visibly unhappy. She later found her way to #AWC and delivered her speech.
A post shared by Instablog9ja (@instablog9ja) on Sep 30, 2019 at 10:35am PDT