Fikayo Tomori Chelsea defender has publicized he chose to play for England over Nigeria since they were the first to hand him a senior international mobilization. 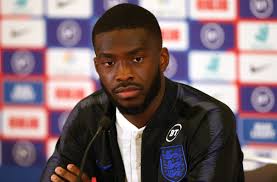 England coach, Gareth Southgate, incorporated Tomori and fellow Chelsea player, Tammy Abraham, in his 25-man squad for their Euro 2020 contender against the Czech Republic and Bulgaria.


He said, “England is such an immense nation, as well as Nigeria and Canada, so I think I was going to be pleased with whoever called me up – but it’s nice it is England,” he told Goal.


“It wasn’t England all the way. I had certain people and certain things that I had to deliberate. I spoke to my family and people about it and that’s the conclusion I came to. So, when England came calling, it was tough to say no.
“It was just more of a thing I was waiting for a call-up because the last international break I didn’t get a call-up from anyone. This international break, I was waiting for a call-up and England called me up.
“I told my family and then it got broadcasted on Thursday. Not at all, I didn’t see it coming. The manager told me and I was like ‘oh’. It was a nice feeling. I’d say so that it came quicker than I expected.