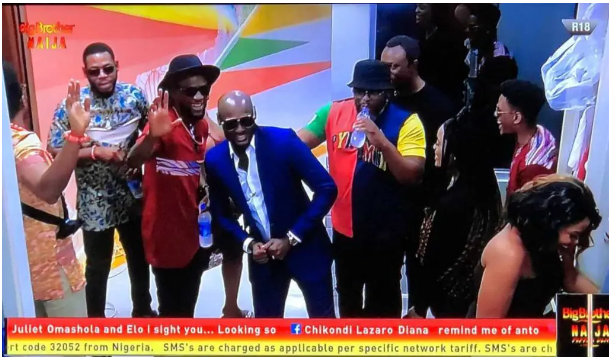 Nigerian Legendary Artiste, 2face Idibia surprised the housemates with a visit in the big brother Naija house yesterday.  Accompanied by Larry Gaaga and Efe Omorogbe.
The housemates were so ecstatic when they saw him walk in, they welcomed him and the other Guests into the pepper Dem house.

As expected, the Housemate began by introducing themselves. Next, they took turns in asking questions about the industry and success tips every celebrity should have.

He said, “Keep your head straight. Respect people, respect your craft. Develop yourself. There is no limit to what you can do.”

To celebrate his 44th birthday, he was welcomed into the beautifully set up Arena, where the Housemates chorused a happy birthday song for him and cut the cake.

To wrap it up, 2Baba introduced his new product to the lucky Pepper Dem top ten as he talked to them about launching his branded headphones.

He also announced that they will be the first set of people to get the branded headphones.