Phone case producers are already starting to figure out what exactly a case looks like for the coming trend of foldable phones. Spigen is one of the first to successfully work out a design, and it has shared mock-ups of three different products it plans to release for Samsung’s Galaxy Fold.

All the cases share similar designs, with their front covers protecting the up and down bezels of the 4.6-inch outside display also with cutouts for the triple-camera system at the back. There are three models — the Ultra Hybrid, Thin Fit and the Tough Armor — with different degrees of protection, ranging from thick plastic case to translucent wraps. The case price will be about $20, and will largely be made out of plastic and silicone materials, such as; PC, TPU, and PU.

While outside of the cases looks relatively familiar, the major addition here is the hinge, which phone case producers haven’t had to account for in the past. It now seems like every foldable phone designer has taken a different approach to the hinge — Motorola seems to be working on one that flips closed, Huawei’s Mate X folds outward, while Samsung came up with a book-like shape using a hinge with multi interlocking gears on the inside to fold closed. We don't exactly know how case designers have designed around the mechanics of the hinge, but the mockup of Spigen’s offered a first look at how they’re handling it. With all these cases, seemingly just by wrapping around the outside. 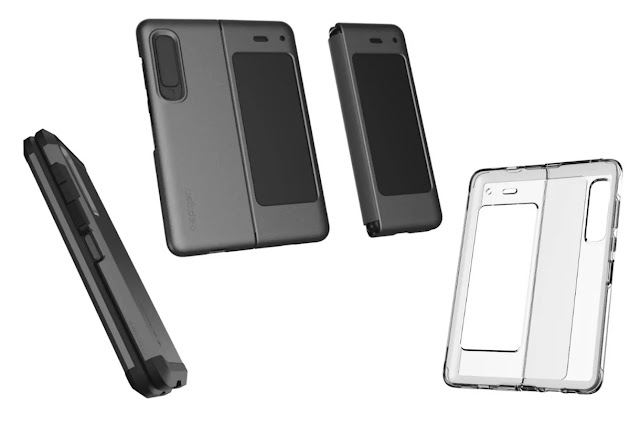 It’s also not exactly clear what the story about protecting the phone’s display will be. It’s most likely that many existing types of screen guard won’t work, and Samsung has not specified if the Fold will come with a preinstalled screen guard like its Galaxy S10. But Samsung has said that the display has been “tested and now guaranteed for 200,000 folds,” which it estimated is five whole years of heavy use. Samsung also tells that its screen is “designed to withstand drops, of course bending and scratching without damaging.”


Another phone accessory company, by the name, Zagg, has said that it’s started a process of developing cases for foldable phones already, but it held back because they don't have the actual phones in hand yet. Given the challenge of creating an entirely different kind of phone case that folds, Zagg said it’s waiting to receive the phone before commenting to fix any potential functional limitations it might have encountered.


Spigen developer has said they were able to put up a model because  Samsung had detailed the exact measurement of the Galaxy foldable device. They have created about 20 different prototypes to prepare for different options and possibilities: “We had to put together all the rumors and find as much sources as possible to analyze the new structure of the phone”

The producers had to consider what kind of material would work best to let its case fold. Spigen has said it is still developing and testing the cases, but aim to launch in mid-April, that's around the time the Galaxy Fold will be up on sales.